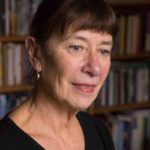 In addition, the fascination with Latin American/Iberian culture has resulted in over 50 translations of authors including Isabel Allende; Elena Poniatowska; José Saramago and anthologies of both poetry [the first, Lovers and Comrades by Central American poet/activists, Women’s Press, 1989] and prose (most recently Lisbon Tales (OUP 2020)).

Hopkinson seeks to unearth the repressed history of women in her family, tracing the story of her maternal grandmother during World War Two.