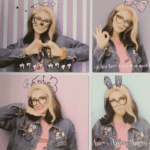 A self-described feminist media studies scholar, Nicole Veneto is currently a second year master’s student in the Women’s, Gender, and Sexualities Studies program at Brandeis University, having received her bachelor’s degree in English with a minor in Women’s and Gender Studies from Simmons University in 2016. A bulk of Nicole’s scholarship seeks to put visual narrative media, the internet and fan cultures in conversation with contemporary sexual politics and socio-cultural representations of the female image via psychoanalysis, Marxism, critical theory, and semiotics. Her previous work has been published in Film Matters , Boston University’s Hoochie Reader, and Anime Feminist. Her master’s thesis, tentatively titled Moe Fantasies, will explore the use and significance of moe anime girl imagery within the online culture of the alt-right and the cross-pollination between geek-subcultures and reactionary political movements through the culture of 4Chan.

‘Don’t take your hate out on me, I just got here.’: Assassination Nation and Foucauldian Incitement to Discourse in the Digital Age