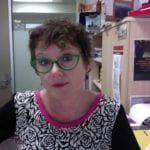 Female documentary filmmakers who seek to re-tell their mothers’ stories create opportunities to re-negotiate and re-invest in the lost, interrupted or ‘slipping away’ maternal relation.