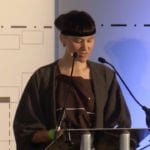 Gabriel A. Maher is a designer currently living and working in the Netherlands. With a background in interior architecture, Maher’s practice is essentially focused on relationships between body and structure and an interest in objects and systems. Their investigations confront a range of intersectional concerns, which frame concepts of gender, race, and class as well as highlight how the body, identity, and subjectivity are positioned, organized and managed through design and media systems. Until 2012, Maher practiced and taught interior architecture and design in Sydney and Melbourne, Australia—during this time being awarded the SIDA Foundation Mary White Memorial Scholarship from the University of New South Wales, nominated for the Vice Chancellors Distinguished Teaching Award while teaching at RMIT University and lastly, in 2011, becoming the recipient of the SIDA Foundation Travelling Scholarship. In 2014, upon completion of a Master’s degree in Social Design at Design Academy Eindhoven, Maher received the Keep An Eye Foundation Grant and Gijs Bakker Award. In 2015, Maher became the recipient of a Stimuleringsfonds Creatieve Industrie Development Grant for the Netherlands. They are the recent recipient of the Stimulerings Fonds Internationalisation Grant and the Keep an Eye Grant for DAE Alumni, 2016 and Designer in residence at Iaspis in Stockholm.

Abandoning Happiness for Life: Mourning and Futurity in Maja Borg’s Future My Love (2012)

Backman Rogers watches Maja Borg’s Future My Love (2012) to ponder on our quests for happiness and intimate relationships.