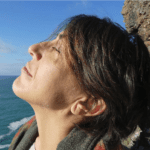 Dr Carolyn Shapiro is a Senior Lecturer in Critical Theory at Falmouth University, where she has been teaching since 2002.  She is Coordinator for the Critical Studies program for BA Illustration, and the primary theory tutor for MA Authorial Practice and MA Creative Advertising at Falmouth University.  Her critical frameworks include psychoanalysis, semiotics, and deconstruction, including feminist, postcolonial and queer theory.  She received a PhD in Performance Studies from New York University in 2004.

Her research considers uncanniness, incorporated bodies, queer bodies, leaky bodies, performing objects, happy performatives, mischief, and the philosophy of Jeremy Bentham. Forthcoming publications include a chapter in the Wiley Blackwell Companion Guide to Illustration on Historical and Philosophical Relations between Illustration and The Uncanny; and a chapter in Bentham and The Arts, to be published by UCL Press, about Bentham’s texts on homosexuality, religion, and the arts.

Solicitations, or Asking For It: The Violations of Anish Kapoor’s Dirty Corner

In the summer of 2015, British artist Anish Kapoor was invited to create a temporary public artwork in the gardens of Versailles. The not quite abstract representation was admitted by Kapoor to be ‘very sexual’.