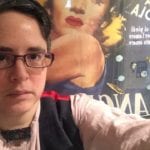 So Mayer is the author of Political Animals: The New Feminist Cinema (IB Tauris, 2015) and The Cinema of Sally Potter: A Politics of Love (Wallflower, 2009), and of (O) (Arc, 2015), The Private Parts of Girls (Salt, 2011) and Her Various Scalpels (Shearsman, 2008). With Sarah Crewe, they co-edited Glitter is a Gender (Contraband, 2013) and Catechism: Poems for Pussy Riot (English PEN, 2012) and co-wrote signs of the sistership (kfs, 2013). So works with queer feminist film curators Club des Femmes and with Raising Films, a campaign and community for parents and carers in the UK film industry.

Thick Description/Anatomy of a Scene: Top of the Lake: China Girl (Episode 3, Chapter 6)

We honour the feminist queer work and the lasting legacy of Dr Katharina Lindner, who passed away in early 2019.