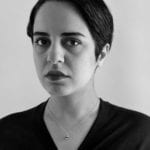 Sara Kazemimanesh is a PhD candidate in Interdisciplinary Arts and a scholar/artist in Film at Ohio University. Her background is in literature, history, visual culture, and journalism. Sara’s PhD research focuses on women in expanded cinema and their initiation of a new discourse of body politics in contemporary Iran. Her areas of research include film theory and practice, experimental and underground movements in film, modern history, and postmodern theory.

As a writer and editor, Sara’s collaboration with photographer Newsha Tavakolian has resulted in three critically acclaimed projects: Listen (2011), Look (2013), and Blank Pages of an Iranian Photo Album (2015).

Using lines from Judith Mayne, Kazemimanesh’s film offers a meditation on traditional narratives and their re-appropriation of the role of women.