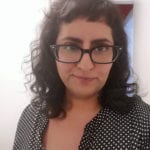 Nosheen is an artist, designer, film tech and moving image curator. She’d expanded her practice to include massage therapy but the pandemic has put that on hold. She co-founded the free film-training course for WoC, Digital Desperados, and is the artistic director of GLITCH Film Festival–the first LGBTQI+ Black and Indigenous People of Colour focused film festival in the UK. Over the last two decades, Nosheen has curated screenings, exhibited artwork and performed in Copenhagen, Amsterdam, Hamburg, Berlin, Montreal, NYC and the UK. She’s currently working on an experimental short and on the Enough! Residency. @steadfastd3sign

Navigating Race and A Lack of Imagination and Vision

Black Lives Matter (BLM) generated a vital shockwave across the film industry and its racism. But what happens when this white industry starts to forget and reverts to business as usual?