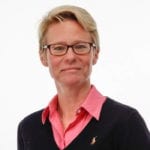 Mariah Larsson is a Professor of Film Studies at Linnaeus University, Sweden. She received her PhD in 2006 with a dissertation on Mai Zetterling’s feature films of the 1960s. Since then, her research has mainly focused on film and sexuality. Her recent publications include The Swedish Porn Scene: Exhibition Contexts, 8mm Pornography and the Sex Film (2017), Swedish Cinema and the Sexual Revolution: Critical Essays (co-edited with Elisabet Björklund, 2016), and “Documentary Filmmaking as Colonialist Propaganda and Cinefeminist Intervention: Mai Zetterling’s Of Seals and Men (1979)” (with Anna Stenport, 2015). Currently, she is working on The Face of AIDS film archive, a collection of film material documenting the HIV/AIDS pandemic (edited volume A Visual History of HIV/AIDS, with Elisabet Björklund, forthcoming 2018) and a monograph in English on Mai Zetterling’s career as a filmmaker.

Mai and MAI: A Reflection

Demystifying the worthy figure behind our journal’s name, Mariah Larsson reads MAI Manifesto and praises Mai Zetterling (1925-1994) to show her as the most fitting patron of our work.