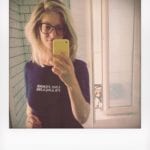 Lauren Elkin is the author, most recently, of Flâneuse: Women Walk the City (Chatto & Windus/FSG), which was a New York Times Notable Book of 2017, and was shortlisted for the PEN/Diamondstein-Spielvogel Award for the Art of the Essay. She is the translator of Claude Arnaud’s biography of Jean Cocteau (with Charlotte Mandell), which won the 2017 French-American Foundation Translation Award, and of Michelle Perrot’s The Bedroom: An Intimate History, forthcoming from Yale UP. Her essays and reviews have appeared in the New York Times, the Guardian, the Times Literary Supplement, Women: A Cultural Review, the Journal of Narrative Theory, and Modernism/modernity, among others. She has lectured at the University of Liverpool, the American University of Paris, and New York University. She lives in Paris.

Lauren Elkin reflects on the passing of Agnès Varda and what her art and politics can teach us.

Disappearing into the Future Perfect: Spaces of Self-Picturing in the Diaries of Susan Sontag and Alix Cléo Roubaud

Elkin situates the diaries of Alix Roubaud and Susan Sontag alongside their creative work. A new reckoning of the personal and political.