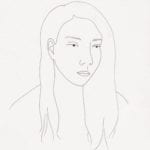 Harriet Lee-Merrion is an artist and illustrator. Her work is rendered in a wash of pastel colours and delicate black lines influenced by botanical engravings, surrealism, and Japanese woodblock prints. She has worked with international clients including Google, TED, The Guardian, Bloomsbury and The New York Times, while her work has also been exhibited internationally in New York, London and Berlin. She is the recipient of a 3×3 International Illustration Award for Editorial Illustration, and is a winner of an American Illustration Award. Harriet is represented by Heart agency. She lives and works in Bristol, in the South West of England and has been working as an illustrator since graduating from Falmouth University in 2013.

Recent titles include creating illustrations for Margaret Atwood’s apocalyptic novel, Oryx and Crake, published by the Folio Society. Harriet has also illustrated The Dream Decoder; a deck of 60 cards to help interpret the subconscious, published by Laurence King. Most recently she has created artworks for Warriors, Witches, Women, an anthology of mythology and folktales published by Quarto.

Pick Me Up: Poems and Extracts from Briefing Notes and Exchanges

Kiernan & Lee-Merrion present notes on two poems to demonstrate their contextual and gender reflection that inspired their poetry book in 2014.