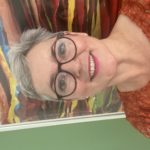 A Professor of Textiles, Catherine holds a PhD in Composite Textile Engineering (supported by Ford Motors), is Editor-in-Chief of the Taylor & Francis journal TEXTILE: Cloth & Culture, and author/edited the four volume Textiles: Critical and Primary Sources for Bloomsbury (2012). She has published one monograph (Intersex Berg, 2007), a number chapters including on cloth intimacy and masculine mourning for Erotic Cloth (Millar, L., Kettle, A., Bloomsbury, 2017), as well as scholarly articles including “Oestrogen Rising 2016: Ireland’s Stained and Bloodied Cloths” in Social Identities: Journal for the Study of Race, Nation and Culture. She was awarded the Textile Society Critical Writing Award in 2015 and is currently preparing a monograph for University of Leuven’s Reflections series.

A visual artist before turning to writing, Catherine’s sculpture, performance and public arts practice have been exhibited in Ireland, Scotland, England, North America, throughout Europe and Japan. Artist-in-Residence at the Irish Museum of Modern Art, Canada’s Banff Centre for the Arts, Finland’s Nordiskt Konstcentrum and the National Museum of Prague, her work is held in many private and public collections, including those of the Irish Government, the NHS, and the Tyrone Guthrie Centre. She is an Honorary Member of the 62 Group, an international artist-led organisation devoted to celebrating excellence in textile art.

Catherine has recently returned to material practice to examine her identity as a part of the Northern Irish feminist diaspora, and has most recently completed Áine, a large work constructed from stitched and stuffed intimate textiles, for a private collection in Australia.