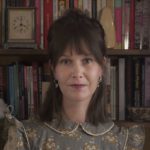 MAI co-founder and co-editor-in-chief, Anna Backman Rogers is a Professor in Aesthetics and Culture specialising in feminist theory at the University of Gothenburg, Sweden. She is also the author of American Independent Cinema: Rites of Passage and The Crisis Image (Edinburgh University Press, 2015), Sofia Coppola: The Politics of Visual Pleasure (Berghahn, 2018), and Still Life: Notes on Barbara Loden’s Wanda (Punctum, 2021).

Anna is currently working on the BFI Classics volume on Peter Weir’s Picnic at Hanging Rock (Bloomsbury, 2022), a monograph addressing the cinema of Lynne Ramsay through notions of ambiguity and ambivalence (Berghahn, 2024), and a co-edited volume with Laura Mulvey on feminist filmmakers, scholars and practitioners (Bloomsbury, 2024).

Artist Hanna Norrna discusses her working methods, materiality, and her participation in the creative community.

Remembering the Female Pioneer of Artistic Weaving: The Legacy of Frida Hansen

MAI meets Anne Sommerin Simonnæs from the National Museum in Oslo to honour and celebrate the legacy of Frida Hansen, the Norwegian mother of creative weaving.

‘I must have been a weaver in a previous life’: A Dialogue with Hannah Waldron

Artist Hannah Waldron talks about how she became a weaver, her artistic inspirations, creation and temporality.

Youthquaker (Girl of the Year)

An ode to Edie Sedgwick, ‘Warhol’s muse’, via notions of ‘original’ and ‘copy’ and the difference between being looked at and being seen.

In Conversation with Julia Peirone

Photographer Julia Peirone talks about the importance of girlhood in her work, the relationship between subject and photographer and her influences.

In Conversation with Aparna Sharma: Feminist and Decolonial Documentary Practices in NorthEast India

Filmmaker and scholar, Aparna Sharma reflects on her creative documentary practice in Northeast India in terms of both feminism and decolonisation.

Ingrid Ryberg’s film En armé av älskande is a documentary about queer filmmaking as a crucial part of the gay liberation movement in Sweden in the 1970s.

Abandoning Happiness for Life: Mourning and Futurity in Maja Borg’s Future My Love (2012)

Backman Rogers watches Maja Borg’s Future My Love (2012) to ponder on our quests for happiness and intimate relationships.

Bringing Brophy Back: In Conversation with Kate Levey

Kate Levey reflects on the extraordinary life and legacy of her mother, the writer and activist, Brigid Brophy.